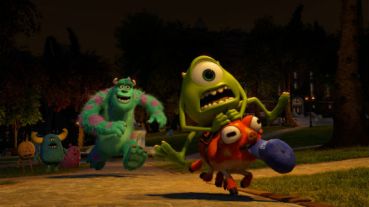 In “Monsters University,” studios Disney and Pixar pay a grand revisit to the world of workaday boogeymen first brought to the big screen twelve long years ago in the wonderfully inventive computer-animated hit “Monsters, Inc.,” where the monsters in our closets were revealed to be harvesting our screams of terror to power their city. A belated prequel to that 2001 gem, this delightfully witty and thoroughly engaging follow-up transports us back to the college years of future best buds Mike Wazowski and James P. “Sulley” Sullivan, who before becoming the top scare team at the Monsters, Inc. factory were enrolled at the prestigious Monsters University with the same determined goal: to become the biggest scarer in all of Monstropolis.

Once again voiced by Billy Crystal and John Goodman respectively, the walking, talking, hopelessly neurotic eyeball and blue-furred gentle giant initially clash heads in the institution’s famous “scare program”: Mike is the brainy, unscary nerd with his eye always buried in a textbook while Sulley is the jockish party animal skating along on natural talent (and his loud, ferocious growl). When their classroom bickering goes one step too far and sees them unexpectedly booted from the program, the collegiate rivals decide to join forces along with a ragtag fraternity of misfits to win the annual Scare Games in a bid to prove to the tyrannical, dragon-winged, centipede-legged Dean Hardscrabble (Helen Mirren, “Hitchcock”) that they truly are scarers worthy of MU. (Continue Reading…)

For more from Stephen Watson, visit JUST ANOTHER MOVIE BLOG!