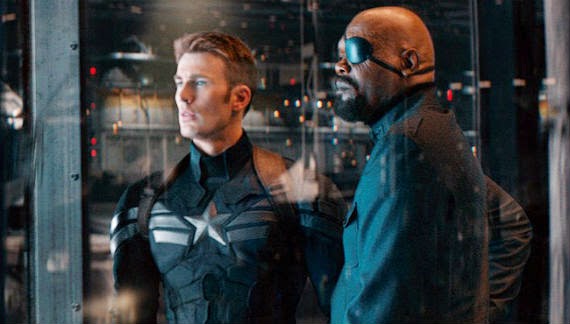 Though recently defrosted from his days as a WWII super-soldier and supposed to be readjusting to the ways of the modern world, Chris Evans’ star-spangled man with a plan has found himself slap-bang in the middle of a ‘70s paranoia thriller — featuring Robert Redford, no less. In Marvel’s “Captain America: The Winter Soldier,” there are some shady goings-on over at S.H.I.E.L.D. — shadier than usual, anyway. The super-spy organisation at the centre of Marvel’s ever-expanding cinematic universe is not to be trusted, if you’d believe such a thing: in an underground bunker, they’re building helicarriers worryingly capable of wiping out suspected threats before they’ve actually done anything; a covert mission to stop the hijacking of a ship turns out to be a cover for extracting top-secret data; hunted by mysterious foes, S.H.I.E.L.D. director Nick Fury breaks into Cap’s apartment and advises him to “trust no one;” and Redford’s high-up official Alexander Pierce, along with the rest of S.H.I.E.L.D., is starting to look awfully sinister. If Joe Johnston’s 2011 predecessor “The First Avenger” was in the pulpy vein of the Indiana Jones adventures, the Russo Brothers’ sequel has the paranoid political charge of old conspiracy movies like “All the President’s Men,” “Three Days of the Condor” or “Marathon Man” — albeit with a little more computer-generated leaping and flying and kicking and punching, mind you. (CONTINUE READING…)

For MORE from Stephen Watson, visit ADVENTURES IN MOVIE BLOGGING!