Tons of speculation is flying around about Kanye West’s jaw-droppingly sexy video for FADE, a track from his latest album The Life of Pablo, featuring Ty Dolla $ign and Post Malone. Like most of the insanity Kanye has been up to, his art carries some kind of subliminal message, direct message, or manic and mental symbolism that can only be known by West, himself, or a vision from the kaleidoscope that Gary Busey must see every time he shuts his eyes.

The video features a barely clothed Teyana Taylor, who you almost certainly won’t recognize from My Super Sweet 16, now 25 years old, and therefore, beating Rihanna by a full 3 years. Way to go.

As the song ends, we get this image: 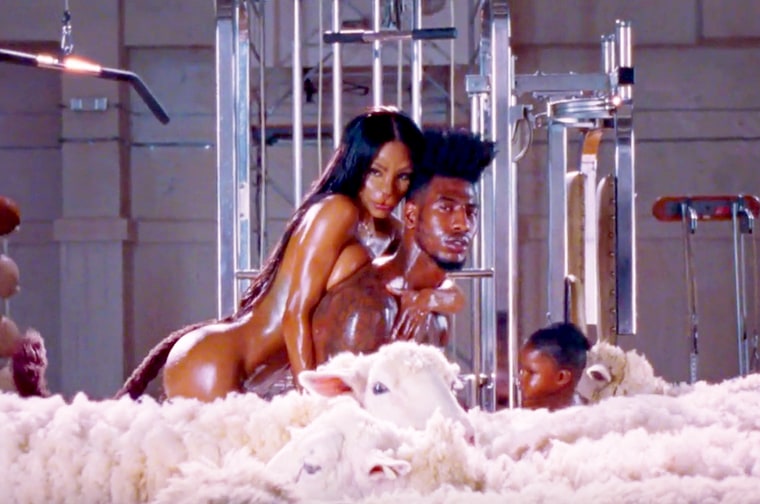 The video, which premiered at the VMAs suddenly became the talk of the Internet as people attempted to decipher the hidden meanings within.

I’m sure Kanye West will inevitably offer some off-the-cuff bullshit explanation at some point, but for now, I’ll venture an honest guess. Something West would almost certainly never say.

Like many artists, Kanye West has a low-key disdain for his audience. At least most of his audience. And he’s having fun with it. I’m sure he adores his fans and the money they feed him, but he only truly has respect for the ones who pretend to “get” him. This can be explicitly found in his utterly obscene and delusional  “fashion shows”, or the recent controversy over his pop-up shop clothing lines and how everything is just ludicrously over-priced thrift store merch. He’s milking the rich because he can.

Fade feels like a follow up to Famous, West’s previous video about the creeping evils of celebrity voyeurism. I interpret this one the same way. It is a look at the notion that tits and ass will sell anything and captivate an audience…of both men and women. A very provocative and super-literal visualization of the classic “sex sells” mantra. And it is followed by a not-so-subtle reminder that we’re all sheep that Kanye West has herded into this “room” where celebrity sex is taking place. And now the desirable sexual creature (Taylor) has transformed into a cat-woman. Still just as sexy in a twisted way–because Kanye West has not only tickled your pickle, but now he’s dictating what you find sexually appealing. He wins.

1 thought on “Kanye West Makes It Weird with “Fade””