I’ve always been against “pride.” No singular pride in particular; but unearned pride should have no place in our country. The circumstances of your birth should never be a source of pride.

Once you’ve let your identity politics take the place of actual meaningful accomplishment, all that’s left is racial, gender or ethnic hubris that can only serve to discount or alienate others. Pride, as an institution outside of being proud specific accomplishments, is for the doomed.

June is supposedly “Pride Month” in America; and this upcoming weekend, the annual Gay Pride marches will be held in every major city. The purpose of these events was always to create an environment of celebration and openness for individuals in the LGBT (and whatever other letters you wanna throw in there) community; to combat the notion of being closeted or hiding in the shadows.

This year, we’re seeing two drastic changes emerge. One has been a long time coming–the expansion of the LGBT community into more than sexuality and identity, but political alliances, and sociocultural normalcy with nothing really left to fight against…so they begin to create fractures amongst each other. The other is a direct response to the election of Donald Trump–a sense of immediate danger, a sense that their lives or wellbeing are under attack by some unseen imaginary forces.

And therefore, this Pride March season, Republicans and Conservatives in the LGBT community have no place. Perhaps ultimately more telling is that the marches have been re-branded as “Resist Marches,” insinuating that the need for LGBT pride and exposure has been trumped (pun intended) by partisan fear over the President.

It has been noted by many LGBT Trump supporters that the “gay pride” phenomenon is officially over.

Yet another victim of “pride” has been the official symbol of diversity in the LGBT community: the rainbow flag. Due to some racial tensions within the LGBT movement, areas like Philadelphia have officially introduced a new flag…a rainbow…with black and brown added to the mix.

Black and brown were added to represent (duh) black and brown people in the community…but to what end? The rainbow itself is a representation of racial and cultural diversity, and a spectrum of sexualities and identities…so where does black and brown fit in?

Clearly, these colors were are a literal virtue signal from a hysterical political left wing desperate to find a way to prove their careers and place in society is still relevant. 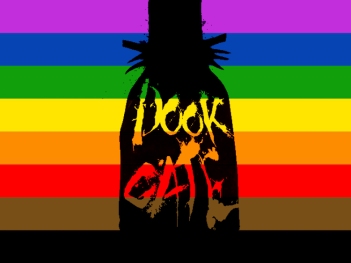 But let’s end on a fun note that clearly proves that those in the movement have lost control of all reason and function: The Babadook.

A glitch in Netflix‘s algorithm accidentally featured select horror movies (including The Babadook) amongst the suggestions for LGBT Films. Some astute (read: autistic) members of the 4chan community decided that this would be a grand opportunity to make another ridiculous trend viral: The Babadook (a fictional monster that represents uncontrollable depression and mental illness) would be turned into an LGBT icon.

And the community (largely spawned from fidget-spinning Tumblr dorks) went along with it…of course they did. Because when you’re so focused on infighting, virtue signaling, and generating inane scare tactics about a fictional GOP Gestapo rounding up anyone whose shorts are too short…you miss out on the truly important things: trolls using a fictional Australian book-ghost to make you all look like psychopaths.