https://www.youtube.com/watch?v=KIViy7L_lo8 At the end of each year, it's customary to reflect backward instead of looking forward. Pretty much the only forward-thinking we ever do is related to some doomed-to-fail resolution that we wind up breaking within the first month of the new year when the first celebrity we kind of liked dies. Pass the cigarettes,… END_OF_DOCUMENT_TOKEN_TO_BE_REPLACED

You and Star Wars have had a good run. You saw the original movies when you were young and grew to love them more and more with age. One of the first shining moments in your cinematic-viewing youth was watching the towering and imposing figure of Darth Vader on the screen; dark, deadly, terrifying. You've had endless… END_OF_DOCUMENT_TOKEN_TO_BE_REPLACED

https://www.youtube.com/watch?v=MKH6PAoUuD0 There's something happening; and it goes far beyond a year-long meme war (never forget). A new language has been created, new heroes have emerged, a complete mainstream media world-view has been uncovered and challenged at every turn, and the infighting among new cliques like the Alt-Right and Proud Boys has already begun. Thus begins the "Centipede's… END_OF_DOCUMENT_TOKEN_TO_BE_REPLACED

https://www.youtube.com/watch?v=e3VPZsqS1qE There's a lot to love here in this seemingly impromptu meeting of President-Elect Donald Trump and too-woke-for-this-planet genius Kanye West. This quick press-invited meet-and-greet comes on the heels of West being released from a mental health facility after confessing his admiration for the Donald and cancelling his tour. It was clear from the brief snapshot we have… END_OF_DOCUMENT_TOKEN_TO_BE_REPLACED

https://www.youtube.com/watch?v=_sbT3_9dJY4 While it's ultimately refreshing to have individuals who have a seemingly limitless history of being categorically wrong about every major issue involving race, gender, sociology, and economics suddenly get super-into international politics instead, one does not simply become magically red-pilled when one's political nemesis becomes God Emperor. In this latest and transparently bogus attempt to (at… END_OF_DOCUMENT_TOKEN_TO_BE_REPLACED 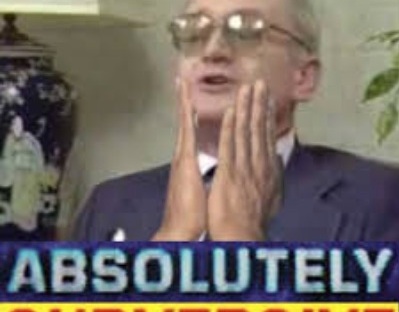 It was in February of 1970, a presumably cold and grey day in the former Soviet Union, that Yuri disguised himself as a cartoon hippie, complete with fake beard and shaggy hair, and joined a pro-commie tour group that allowed him to flee his homeland to Athens, Greece. After lengthy security checks by United States… END_OF_DOCUMENT_TOKEN_TO_BE_REPLACED

It's been a rough road for the American dad. From their portrayal in commercials since commercials existed, to being walked all over in every HGTV reality show where he's forced into living in a Tiny House, or choosing between identical paint swatches, the USA Daddy has been dragged into his role as the castrated fool. Dads don't… END_OF_DOCUMENT_TOKEN_TO_BE_REPLACED

Recently, a new organization has cropped up all over the media landscape and they're getting quite a bit of attention. The group is called Hamilton Electors and they are made up (as far as I can tell) of a tiny handful of members of the Electoral College who are both born without genitalia and devoted to… END_OF_DOCUMENT_TOKEN_TO_BE_REPLACED

Been watching #Derek on Netflix again. I can’t think of a more emotional show. @rickygervais has been my inspiration since The Office days. He never ceases to impress. I hope to see much more! Thank you @rickygervais
Happy #WinnieThePoohDay
I think it’s time for a hustler in Congress. Right? #CardiBforCongress @iamcardib #SailorTwift www.sailortwift.com
#themandalorian #starwars #maga #conservative #womensmarch #marchforlife #march4life #kag #trump #gop #republican